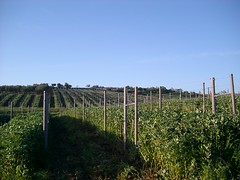 Casano vineyard is located in Maschito municipality, in the district of the same name, and it is composed of 12.03.13 hectares.

The main exposure is at West with rows’ direction for 80% along the maximum slope and for the remaining part in cross-sectional way.

The cultivated varieties are for 70% Aglianico del Vulture, 9% Moscato Bianco di Basilicata, 3% Malvasia Bianca di Basilicata, 7% Chardonnay,7% Sauvignon and the remaining 4% is intended to the recovery of varieties cultivated in the same territory and in the Piano dell’Altare vineyard as well. For these, as for Piano dell’Altare, it is used the 420A as rootstock. The same is present for the most part of vineyards. A little portion use also 140R, 770 e SO4 and Rupestris Du Lot.

The land is made up of mean mixture soil, tending to a clay soil.

The subsoil is composed of conglomerate and sandstone tuff, being about a lake deposit of the Quaternary.

Also in this case, like in the other vineyards where volcanic tuff was present, this particular endowment allows a good water stock during the dry summer months.

Along every access street there are olive trees of Rotondella and Ogliarola del Vulture varieties.

Other olive trees, of the same varieties, are cultivated in the parcels that are reported as rushes in cadastre.

As a whole, there are about a hundred of olive trees.

These plants have an age between 5 and 30 years.

They have been object of transplantation, seeing as before of the vineyards restoration they were disseminated in a messy way within the same vineyards. They have been, so, transplanted and bedded out to realize not only a pleasant ornament, but also a convenient olive implant whether for treatments or harvest and transport of olives.

In the olive grove, it has been realized also an artificial small lake, with a capacity of more than 200 cu.m. that represent an important water stock for the pest management carried out during spring/summer period.