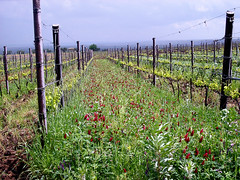 The Cerentino-Sterpara Grande small farm is situated in Maschito municipality, in the district of the same name and it is composed of one plot, divided in two by a sheep track that separates the olive part from the vineyard part. The whole surface is 2.20.64 hectares. In particular, the olive grove has a total size of 0.83.92 ha, whereas the vineyard is 1.36.72 ha.

It is distant, so, 27 km from the Ripacandida administrative centre.

Its altitude is about 480 mamsl and it has a level land configuration.

The land tend to a clay soil, with a subsoil made up of sandstone tuff and conglomerate as in the Casano vineyard.

The variety cultivated is Aglianico del Vulture which was implanted in 1972.

The olive grove, realized in 1972, is composed of about 250 plants of Coratina varieties, for the most part, but also Ogliarola and Leccino varieties.