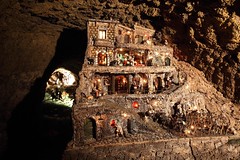 The Nativity (Presepe) has a symbolic and allegorical meaning and is very important to explain every detail, to understand the profound significance of it. This piece was realized starting from an idea of Gerardo Giuratrabocchetti, and magistrally composed by a local artist, Mr Edelmondo Paolella aka "Mondino". 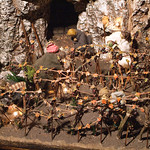 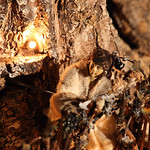 In our immaginary path, aim at discover uses and habits of our territory, we start, indeed, from the territory, the soil! The vineyard is a patch of land, the land ownership was less than half hectar ("tomolo" in southern italian dialect) and the whole family use to depend on that.

In the vineyard there is the separation of roles: the man is working the soil, the woman is harvesting.

This division underlines the diversity of commitment between the two, but the woman is not represented as a subservient figure, on the contrary she was playing a key role for the outliving of the rural family. In fact, in this representation, women are the majority and they symbolize "the renewal of life".

From the vineyard, the grape was placed in baskets and carried in the cellar by the donkey (real engine of ancient agricolture). The real good to sell for the farmes is the wine, so after the harvest begins the real hard work, when every little mistake could be a failure! 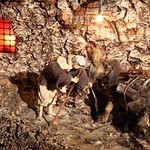 And "The Donkey"? it is ready to fight is private war against the owner, who loves the animal (for the work that it does) and hates him at the same time (because it is stubborn, ostinate and wates time). 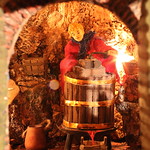 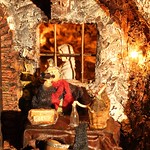 The grape arrives in the cellar, the white (Moscato, white Malvasia, St Sofia, Abbottapezzenti, Chiangalo) and the black grape (Aglianico del Vulture, Aleatico, Colatammurro, Stampacavallo, Moscato Nero, Malvasia Nera). Here we have the pressing process in vats or in "palmenti", stone or concrete tanks. In the cellar there is a crucifix on the top of an half circle, the sacre symbol of vinification. Jesus Christ dominates the barrels (the half circle) and controls the winemaking process.

The marc gets into the pressing machine where becomes pressed wine (stringitur). After several steps, in contact with water, this pressed wine becomes "every day wine", that was used to fill up the pantry. For this reason this wine was denominated, depending on different steps "the first pantry", the "second pantry" and sometimes "the third pantry".

Outside the cellar there is a man, who drinks wine. He represents the man that is unable to wait, but that is wrong because the wine and its process takes time, like every beautiful thing of life.

He symbolizes a person that is absorbed by a chaotic life, he is unable to wait anymore to taste the true plesures of life.

"The Workshop of the Master Cooper" 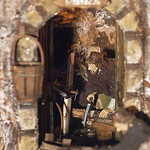 Nearby the cellar there is the workshop of the "Master Cooper" (Mastro Bottaio), where there is who sees the wood and who planes the staves to make the barrels. 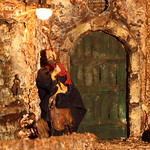 It is represented a man that does a very ancient job: the man is lighting up street gas lamps. He symbolizes Christmas: as Jesus with his birth brings light to the world, so "The Lucerne" brings light to town.

The Fountain and the Laundress 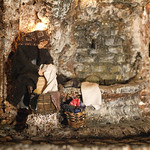 The fountain puors spring, pure, crystal clear water and represents the salvation of Jesus. The source of water is opposed by the fire sources in the Nativity. There are several fire sources in different areas, because fire symbolizes temptations, that are everywhere but we can escape from them through the Grace of Jesus.

Nearby the fountain there is "The Laundress". This figure represents an old job of the ancient women. This job allowed women to go outside and gossiping with other countrywomen. In this Nativity the laundress, along with the water symbolize the possibility that Christmas offers to people: the purification of Spirit! 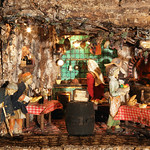 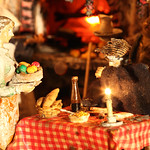 La Trattoria of "Rocco Faloc" was located in Via Umberto I, in the centre of Rionero in Vulture.

"Rocco Faloc", named like that for a linguistic distortion of the nickname "Rockfeller", that he gained for his past in America, had a very famous restaurant for the fine cuisine of his wife.

In the Restaurant there are several women, cooking and serving at the tables or making bread and "cucul" (white flatbread focaccia). Every spot is made with attention, there are salami, hams, every kind of delicacy and of course...wine!

At the table, in the front, there is a man, that executes a ritual: he splits the bread and pours the wine. It is clear the spiritual meaning of this gesture: the man after a day of work eats the fruits of his hard work. It revokes a Christian ritual (Eucharist). 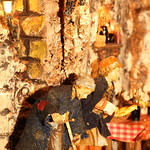 Two young men, begging outside the restaurant, are the symbol of "Unfortunated Fate". One of them has no legs. It represents that life is hard and that when the Fate strikes does not discount. 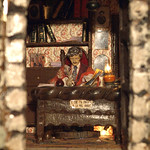 The house of the Notary represents welth, opulence, richness. It is a strident conflict with the poverty of the two young beggars.

In the Notary house the furniture is austere, the Notary is finely dressed, with his golden cuffs. Behind his back there are three small paintings, that represent "The Bandits" (I Briganti), and a crucifix. This conflicting symbols show that the influent and rich people of the time, were protecting their properties, turning to whether bandits or Saints.

The Notary represents the fact that richness is not evil itself, it depends on how the man uses it. It is the concept of "Talent" that we find in the Gospels, that God gave to man, to see how he will use it! Even for the reach people Jesus comes. Even for the Notary there is Salvation, the chimney sweep, on the top of the house, represents that, indeed. 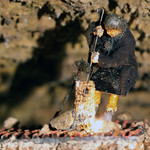 The Chimney Sweep is an ancient job and represents the fact that the house of the whealthy people needs to be cleaned, needs purification! Even for them Christmas is coming!

Shepherds are classical figures in every Nativity; The pastoral world brings a baggage of humility and simplicity in the traditional Nativity. Here we have the representation of two of the great passions of Gerardo Giuratrabocchetti: the vineyard, inherited by the paternal family and the love for animals inherited by the maternal family. 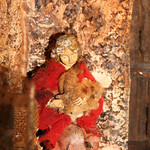 Another feminine character, another old job, connected with the rural world, the "Spinnig Women". It was a very common job in the southern part of Italy, tipical of a humble economy. It represents, as well, the capacity of cherish the small things of life donated by God. 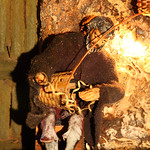 The "Basket Maker" is particularly important, because he was capable to give value to natural products of waste (like reeds). Again, we want to underline the talent of the rural community to create an economy, even though they were really poor!

"The Man in the Darkness" 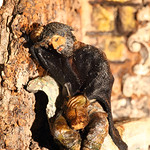 There is a man, seated on a bench, in the darkness. Maybe he is drunk, lost in his thoughts, in his problems. He is lonely, he probably lost hope, he lost his path! He doesn't have to forget that there is always a way, infact behind his back there is the Holy Family, that symbolizes peace and salvation. 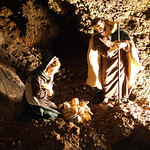 The enlighted path takes straight to the Holy Family, as the Comet that enlighted the path of the Three Wise Men. Here Jesus born! The great miracle of Life is entrusted to a Woman, Mary. Despite everything Life perpetually renews itself! 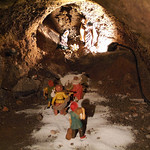 Well-lighted by the road, "The People" walk towards The Nativity. We don't really know who they are, if young or old, if poor or rich, if ignorant or well-educated; It's intentionally unknown, we just know that "The People" are walking towards Salvation. 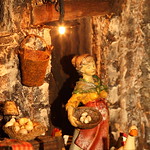 Another important character of the Nativity is the "Pregnant Woman" that sells eggs. She is the best ex

A bird in its nest represents this ode to life. Another bird twitters, perched on a branch. He sings to Life, this magnificient adventure that God gave us! 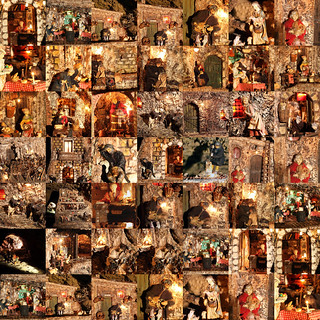 Natural Caves, dated 1600, cut into the volcanic tufo rock, guarantee exceptional conditions for the ageing of the wine. Our Frenh oak barriques thus rest in a perfect balance of temperature, humidity and ventilation.