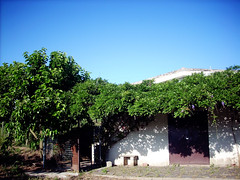 Piano del Duca vineyard is situated in Ripacandida’s municipality, in the district of the same name, and it is composed of one plot of 1.97.18 ha.

The mean altitude of plot is 450 mamsl, with main exposition at East. The mean slope is about 20%. The rows are for about one-third oriented along the maximum slope (East-West orientation), for the remaining part they have south orientation.

Around the enclosure there is a continuous row of espalier cultivated vines as for the whole vineyard.

The poles are realized with pine-wood pole treated in autoclave.

The cultivated varieties are Aglianico del Vulture for 92%, whereas the remaining part is Moscato bianco.

On the outside of the house there is a pergola vine training with good well grown wisteria that decorates the abode, like so a big mulberry placed in proximity of the same built.

The lot is completed by a boulevard illuminated with small lamppost.