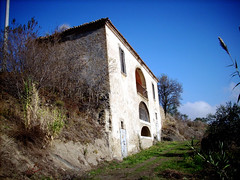 Le Querce vineyard is situated in Barile’s municipality, in the district of the same name, and it is composed of one plot with 2.97.41 ha.

The company, for the first access, is distant overall 2,1 km from Rionero in Vulture’s offices in 159 Via Roma street and 4,1 km from the administrative centre.

The small farm has a substratum made up of volcanic tuff and compact pozzolan, whit a sandy and pozzolan soil in surface and it is possible, even though it is composed of one unit, to divide it, for descriptive convenience, in four different areas.

Given the nature of acreages, very sandy and, the presence of plants increased for offshoot in the area, it has been realized one implant, with a 30% of not grafted scions.

The remaining part is on 420A, for the most, whereas the remainder is on Rupestris Du Lot.

The rows have mainly North-South directionand so they are exposed at East mainly. The implant was carried out in 2005, save the part on Rupestris Du Lot in 2006 and the not grafted part that is the previous one.

The acreage has, at a depth of about 1,00 m, the presence of a compact volcanic tuff which is an important water summer support, above all in consideration of the sandy nature of the soil that can be worked easily in surface.

The rows are organized N-S. The mean altitude is about 500 mamsl, with a land slope of about 15%.

The vineyard has the presence of olive trees (Ogliarola del Vulture variety) of the age of about thirty years, organized in crown on the borders.

The second part, about 0,7580 ha, is made up of Malvasia rows. The spacing of the vines and the poles are as the previous entry.

Point out the slope of about 30%, with an implant at “ritocchino”, but with rather short rows, to allow an easy movement of the means also during the pest management treatments.